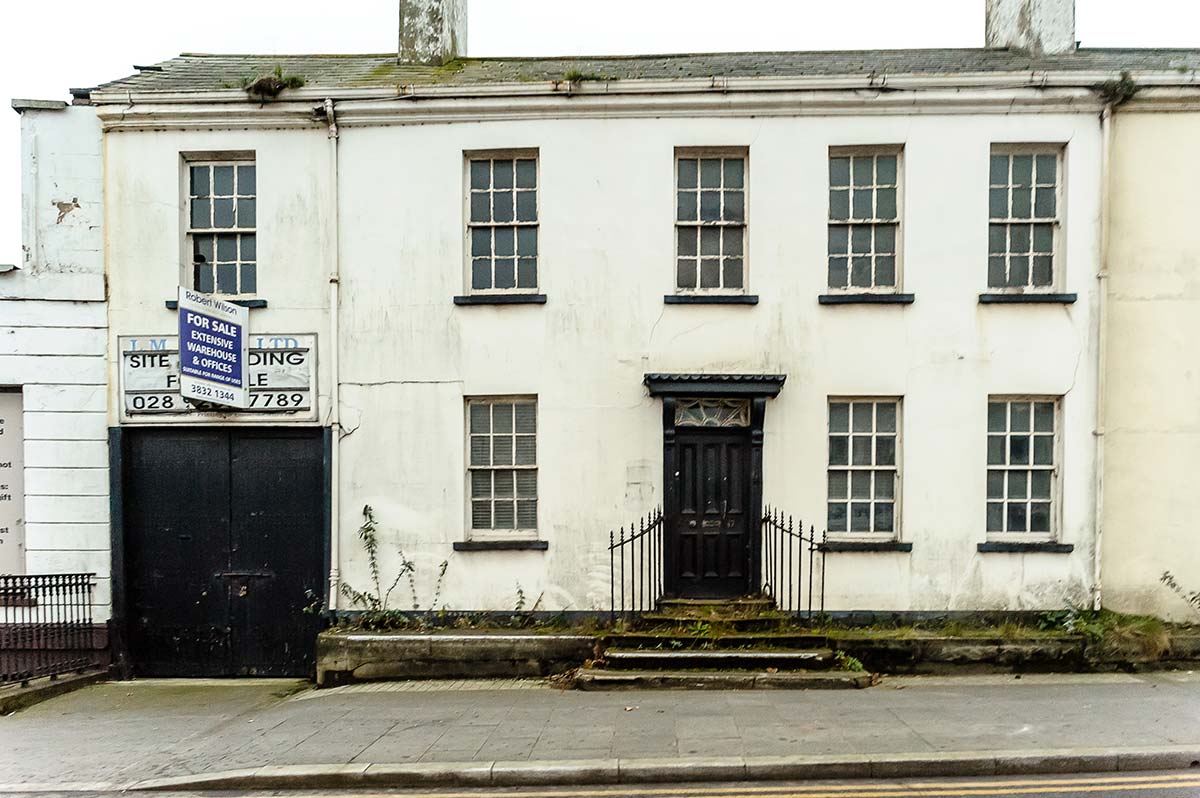 Numbers 45 and 47 High Street originally formed a single farmhouse which was built under the auspices of John and Henry Cuppage in c.1790. By the 1850s the farmhouse had been subsequently split into two properties as evidenced in a newspaper advertisements dating to 1854 announcing the separate auction of the properties which we now know as numbers 45 and 47 High Street. A Miss Watts is noted as letting number 47 at this time. Also advertised for sale were an extensive series of outbuildings to the rear of both properties which were used for offices and warehousing. The adverts note that at this time they were being let by the linen manufacturers Charles Druitt & Company.

According to the Griffiths Valuation Revision Books, by the 1860s the dwelling houses at numbers 45 and 47 High Street, along with the warehousing to the rear of the properties (identified as number 45a High Street) had been acquired by the linen and cotton yarn merchant Samuel McCullagh. During the 1870s the dwelling at number 47 along with the outbuildings at number 45a were let to Samuel’s fellow linen manufacturer William Robert Nelson.

In 1885 the handkerchief firm Murphy and Stevenson then acquired the leases of numbers 45, 45a and 47 from Samuel McCullagh. The company operated their manufacturing business from the outbuildings of number 45a, even establishing a hemstitching factory here. Meanwhile between 1887 and 1931 the dwelling at number 47 was let to a variety of tenants including the confectioner Robert Thompson, a Thomas G. Stevenson and the linen manufacturer John A. Ross.

Murphy and Stevenson appear to have departed Lurgan in the 1930s, with newspaper adverts dating to 1936 announcing the auction of numbers 45, 45a and 47 High Street. It appears the auction was not successful, for the properties were advertised for auction again in 1942. By 1945 number 47 was occupied by John and Emma O’Neile, before passing into the ownership of Doctor W. Bingham by 1954. This marked the beginning of number 47’s long connection with the medical profession with Doctor McNutt, the dentist W.D. Pedlow and Best’s Dental Practice among the occupants over the next 60 years. The outbuildings at number 45a (now 47a) High Street were occupied by the L.M. Press from the 1950s through to 2004.

Now derelict, number 47 High Street has been designated as a priority building within the Lurgan THI scheme. Plans for the property and its outbuildings are currently in the design phase.